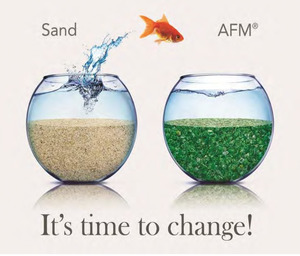 Sometimes things perform as advertised, and sometimes they’re “snake oil.” When bringing on new technologies, you can’t be too care”ful” but also not too care”less,” or you’ll either miss out on opportunities to improve, or you’ll make mistakes that will hurt your customers. Both are unacceptable.

So, when we were approached in 2018 with the opportunity to use AFM®Activated Glass Media in our AMF and Poltank filters, we were intrigued. Why? The thought of providing our customers with affordable, permanent, drinking water grade filter media that came from recycled “brown and green” glass bottles was promising, but was it real? Check out the video.

We researched, we tested, and this is what we found.

The research was great: AFM® had invested with the leading European testing laboratory, IFTS, to verify exactly what the AFM® media could do against 7 other leading medias, at different flow rates, with different additives. The numbers were really promising. Filtration was much better than traditional sand media, and would remove 95% of all particles down to 1 micron at specific flow rates. The best some other medias could do was 20 microns. This was also more current research than CES’s original “garnet” drinking water-grade media that we used selectively since the late 80s.

Activated media was different: Adding an electrical charge to the media prevented media “fouling” or accumulation of organic matter which would eventually bio-coagulate due to bacteria and biofilm, etc. Biofouling helps deter full removal of soils during backwash and, when retained in the filter, would strip chlorine and add chlorine demand to the recirculation system. This will help increase the consumption of chlorine in pools. The exclusive activation process makes the filter bio-resistant, and the IFTS study proves that without activation, regular glass media is not much better than sand.

Opposites attract: The activation charge also aided filtration, virtually increasing the surface area, and absorbing heavy metals and smaller particles. This technical mumbo jumbo means that smaller particles, not normally trapped mechanically between the grains of media, are electrostatically absorbed and clumped on to the surface of the media, and released during backwash. This helps explain the terrific improvement in water quality.

Here is the feedback from our customers:

As you can tell, CES and our customers are really excited to have found, vetted, and implemented AFM® on hundreds of filter tanks so far. We’re also very excited to have become the Florida/Caribbean Master Distributor of the AFM® family of products including AFM® media, APF® Poly Floc, and ACO® stabilizer, among others. This technology is proven to stand heads and shoulders above any other media, and our purchasing power means that CES customers enjoy affordable conversion from sand, and other medias.

Please contact your CES rep for any additional information, or for an estimate on how AFM® can help improve your water quality and cut your operating costs.

We’re glad AFM® has worked out really well for all, and the world’s beer drinkers are surely feeling better about the fate of their recycled bottles.​