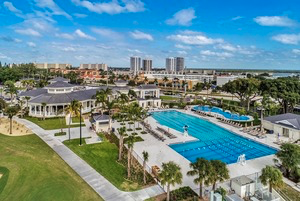 Thirty-Five years is a long time for any marriage or partnership, but when you’re talking about the famous North Palm Beach Country Club (NPBCC) pool operation and CES, it brings back many special memories.

First of all, it is one of the very few 510,000+ gallon full-length 50-Meter Pools in a country club setting anywhere in Florida. The NPBCC swim teams, led for decades by Dick Cavanah, were always at the cutting edge of competitive swim teams, were perennial champs, and feared by all other teams around the state. That program produced swim enthusiasts and Olympic champions alike, and the pool boasted one of the only 10-meter dive towers anywhere, no less in a club setting, which was finally removed.

With their 2019 renovation, the club has converted the 1963 pool to a streamlined, modern, and energy efficient pool that rivals ANY new pool built today.

CES first worked with NPBCC in 1985, when they wanted to cut 66% of their heating costs, and they invested in a CES pool cover system, and saved hundreds of thousands of dollars in heating costs over the years.

They installed their first CES pool controller just after that in 1987, and now are on their 3rd upgrade with their recent change to a BECSys7, which now handles the entire mechanical package including chemistry, backwashing filters, running the pumps by DOH flow rate with great energy savings, controlling the water level digitally, and counting how much water they use.

We helped NPBCC convert from potentially dangerous gas chlorine in the late 1980s, to a safer bulk bleach system, and now to an All-In-One tablet system that provides all the calcium, bicarb, stain prevention, and uses 1/10th of the muriatic acid of their previous system.

In 1997, they converted their ultra-high labor intensive vacuum DE filter system to an EPD filter system which has been providing fully-automatic drinking water quality filtration for 22 years before being recently slated for upgrade.

In 2007, they converted to high efficiency Lochinvar Heaters from CES, and just recently added a CES Glacier Chiller to keep the pool at optimum temperatures during the hot summer months.

The recent renovation, which included both deck and pool upgrades, along with mechanical upgrades, was masterfully completed by Family Pools of Port St. Lucie… thanks to Frank Russo and his team. During that renovation all underground piping was tested and replaced, the painted pool finish was replaced with a modern gem coating, and the deck got a great facelift to ultra modern standards, including color changing LED lights and more. During this time, the 1997 EPD pool filters were upgraded to 2020 EPD pool filters, but the manifolds and backwash valves stayed original, a great testament to their longevity and performance.

New Marlow pumps were outfitted with new CES AMF strainers, and state of the art Motor Control Centers with VFD’s (MCC-VFD’s), and custom-made reducers to smooth out the flow for maximum efficiency.

All in all, the renovation was completed on time and in-budget, and the NPBCC is ready for another 35 years of performance.

Please join us in congratulating NPBCC and their staff for a job well done from start to finish, and from then till now. They have always invested judiciously in their facility and have made tangible improvements as needed, while sticking to a conservative budget and getting best value for the taxpayers and members.

Let us know if you need any information regarding any aspect of the previous or current renovations.