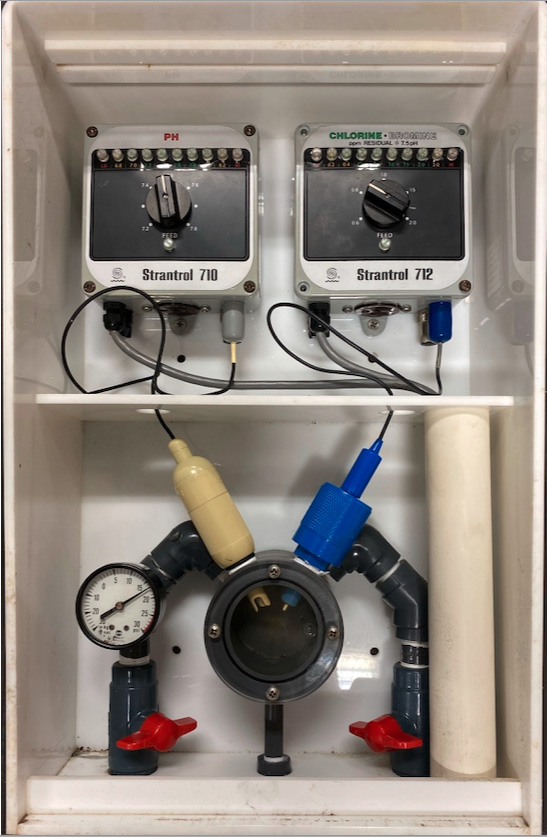 Back in 1989, CES worked with Murry Hills Condo Association management, in Lake Worth, to provide an automated chemical treatment system for their 82,000 gallon clubhouse pool. We attended the board meeting, it was approved, and we installed a System1 shortly thereafter. Murry Hills was really quite the pioneer, as back then control systems were mostly being installed on larger municipal and water park pools, and only the forward-thinking condos had seen the value of the investment.

Over the past 32 years, the System1 has chugged along. We have records of a few service-training calls back in 2006 and 2007, and they probably purchased a couple of sets of ORP and pH sensors over the years, the last one over 10 years ago. Overall, things have been going pretty smoothly to say the least. In 2016, they needed a new o-ring for the flow cell, setting them back $4.84.

Earlier this week, our installation team returned the System1 controller back to the workshop, as customary when we provide a $150 trade-in. It was in amazing shape and looked brand new, a testament to the unbelievable job that Kenny, the maintenance director, did in taking care of the unit.

The shop techs all marveled over the controller saying: “What is this thing? Are you kidding? Look at this relic? This thing looks brand new. What, you calibrate the readings with a small screwdriver?” Those young bucks were giving the system a hard time. The installer defended the system, saying…. “get this, it was still working when I removed it”.

Just then one of the old codgers at CES asked what the commotion was all about, was told, and then asked where the controller came from. The installer replied: “Murry Hills.” “Oh really”, the old codger replied: “I installed that unit back in the 80s.” He then gave the young bucks a quick training on the controller, and how it worked.

The installer mentioned that Kenny, who was there when it was originally installed, indicated that it had worked reliably since then. A while ago, he mentioned to our team that the Chlorine unit was acting a bit funny, so he unplugged it and plugged it back in, and it went back to normal operation. But…he thought,  “it might be time”. So they opted to trade-in the controller for a brand new Precision MR2 system.

Having a control system last that long is really not that rare, as nearly 100% of trade-ins are still working at the time of removal, and the reasons for upgrades are normally that “the controllers don’t communicate or aren’t web-ready”…. Well heck, the World Wide Web didn’t really get launched until 1990.

Please join us in celebrating Murry Hills as one of the true pioneers in providing safe and appealing pool water for their patrons, and congratulate Kenny for his hard work in taking such good care of their equipment. Their investment, which cost them about $90 a year, has turned out to be a good one, and has been paying dividends since Day 1.

Also, please let us know if you ever need some additional training or service on your control system, as nearly 100% of units that are reported as “not working”, are restored to operation in the first service-training session.

Previous post: [ City of Naples River Park Upgrade – On Time and On Target! ]